This week's topic is Roswell, the home of of limitless extra terrestrial and government cover up conspiracy theories springing from an incident In 1947 with an alleged crash of a flying disc.

The official government position on the Roswell incident is that it was simply the crash of a weather balloon, nothing more. Those alien bodies? They never existed.

Of course a huge science fiction industry has emerged. There are the benevolent aliens here to he and warn us - 1951s The Day the Earth Stood Still to the not so benevolent aliens in the Aliens series and another classic, John Carpenter's The Thing (1982) as well as many others

Whatever you believe, there isn't much better than a good movie,
Popcorn and good company

This is the last weekly LBC post Beginning next week, Ramana and I will endeavor bring two takes on the same topic as two on one. We will rotate topic selection weekly.

This weeks topic is people watching - something I have enjoyed for as long as I can remember. I have spent many hours sitting and observing others.

Some of the best people watching happened in Hawaii. I'd hop on my trusty Suzuki 550 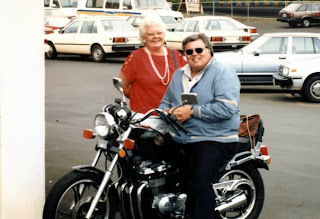 and ease on down the road. My two favorite spots were Waimea Bay to watch crazy people surf the giant waves.

There was nothing quite like sitting on my bike, enjoying a shave ice from Matsumotos store and seeing that. The other great place was a parking lot at the beach where the sail plane school was. I would watch the sail plane (glider) students swooping low and buzzing the beach for hours.

In college I would sit in the coffee shop and look out the window and watch my fellow students. Sometimes I would make up stories about them.

Fisherman's wharf on San Francisco was another goodm spot, usually to watch tourists. A loaf of good sour dough bread, a nice sized salami and a cold beer rounded out the package. Tourists were great fun to watch, especially when they were from land locked areas and were in awe of all things normal to a city by a bay with a large fishing fleet.

I spent a fair amount of time people watching in New York when Lynn and I had business trips there. Mostly I saw folks in a hurry to get somewhere. It was somewhat disappointing, to be honest.

The best thing about people watching is all you need are people. Since there are people almost everywhere, just grab a seat, sit back and enjoy.

This weeks topic is Urban Legends those supposedly true tales that cover a myriad of topics from ghosts and other supernatural phenomena to legendary beasties that vary by locale. My first brush with an urban legend was at the Uptown Theater in Pueblo, Colorado when I saw s movie about the Abominible Snowman. I was 8 or 9 years old.

Fast forward 20 or so years, living in Northern CA and  tales of Bigfoot, including an alleged witness of a  50-gallon oil drum - full of course, thrown down a hill and you have the perfect recipe for a weekend camping trip complete with sufficient supply of beer, guns and cameras. The beer was consumed, shots fired, trees wounded and no film exposed nor were there any Bigfoot sightings but much fun was had.

There are Bigfoot legends I'm several states. West Virginia has a  Mothman and several states have Chubacabra legends. What do they all have on common? Movies. Urban legends here are great stories for horror movies. I have always been a fan of those

At this time of the year there is, of course, the tale of the guy that delivers toys to girls and boys around the world. That, I would suggest, is one of the largest and most universal urban legends

Ghost stories are fairly common in urban lore. The same group that hunted bigfoot looked for the Niles Canyon ghost one Halloween. Let's face it - when you're too old to trick or treat you have to find something to do on Halloween. I suppose it comes as no surprise we struck out on that quest as well, but it may be because we spent more time parked at our favorite spot doing other, more fun things. Hey - we were young. Ahem.

The digital world has ussured in a whole  new level of legend and has spurred the creation of sites like Snopes to check the veracity of posts. Poor Morgan Freeman has probably died a dozen times on Facebook.

Before there were movies there were books. Legendary tales were written down and became things
like Grimms Fairy Tales. Much of what we here in the USA think we know about out western heroes comes from cheap dime novels that spawned TV series based on those legends. Wyatt Earp, Bat Masterson and Bill Hickcock were nothing
like they were portrayed on TV but their urban legends are what we think we know of them.

That's it for this week's topic- see ya next week. Be sure to check Ramana's take on the subject

This weeks topic was offered by Ramana. Back in the early days of our relationship, Lynn cooked me dinner for the first time She did a spectacular job. However, the next time she cooked things did not go so well. When I asked what happened she admitted she could only cook that first dish and in fact did not enjoy cooking. I then proposed that from that day forward, I'd do the cooking and she would do the cleanup - aka the dishes. That deal stuck  for the entire 45 years we were together.

I am a good cook, though I no longer enjoy it much. I live in an environment wherein we all keep different hours and gathering for a meal is unheard of. I refuse tone a short-order cook in my own home.

I never developed a specialty and I don't bake. Baking is way too scientific and requires much stricter adherence to recipes. My favorite flavor profiles are Cajun/Creole and Indian but I don't cook much India n - only an occasional curry dish. I cook a lot of Cajun spiced stuff.

The kids here have an aversion to onions which makes things difficult. I sneak a few in but not enough to suit me. I use Vidalia sweet onions whenever available.  And of course, garlic is a mainstay in my spice cabinet.

I cook a lot of Italian food. It is relatively easy and who doesn't like a nice plate of pasta? I do make a mean lasagna but am more likely to wash it down with a cold beer than  a glass of wine. The trick with Italian especially is good ingredients, bit of course that is true with most cuisines.

Th. e foodie population has greatly expanded in recent decades, thanks to the popularity of TV chefs and a best selling book about the restaurant industry by chef Anthony Bourdain. Bourdain himself has become a famous TV chef personality, which is ironic as his disdain for several of them is obvious when he speaks of them. That hasn't stopped fans of chefs !like Bobby Flay, Emeril Lagasse, the late Paul Prudhomme and others from causing a rise in the foodie population. I confess - Iam a fan of several cooking shows and watch them regularly. I draw inspiration from chefs Prudhomme, Lagasse and others. I particularly enjoy the trave!l/food related shows of Bourdain and Andrew Zimmern on CNN and The Travel Channel.

This weeks topic has been fun to discuss.  Be sure to check on Ramana and the others to see what they have to say. I know Ramana is an accomplished cook.
Ramana