What is the biggest mistake you have made in life? 2 on 1 #4

Okay - time to come clean. What is the biggest mistake I have made in my life? The answer is easy, embarrassing and colossal, IMHO.

Starting at a fairly young age, many if not most things came easy to me. In grade school in Colorado I was always number 1 or 2, in constant competition with my pal Dave Perkins. I left for California before fifth grade, and it turns out Dave was the star quarterback on the state champion high school football team.

In California I was still a good student, but I never had to work hard at it. When I hit the proverbial wall in math, I had math whiz friends to help me out. Every other class was easy.

That was the good news. The bad news was that my only real interest was sports. With the exception of !y first love, baseball , success came fairly easy. All the while, nothing else really interested me. I was - and remain to this day, very shy. I suspect that is why I was not an overly aggressive football player, but I was good. I wrestled for 2 years and placed 3rd in the league my first year 2nd in league my second year, 3rd in the North Coast and made it to the state tournament.

I graduated fairly high in my class but I graduated clueless about life after high school.

I was accepted into the University of California system buy instead enrolled in the local comunity college, hoping to find myself. (Some say I am still looking and they are probably right).

I am now of the opinion that entering any college without a notion about what you want or need to get out of it is a huge mistake. I played football for another couple of years with some success but my lack of commitment collided head on with what was required to continue on to the next level. I briefly considered going to BYU and might have kept playing but my then girlfriend - a student there, left college so I enrolled in Cal- State University. Again, I haad no idea what courses to pursue but I did enjoy Political Science and eventually earned a BA. I was also married and in the real world, but still without any real direction. Lynn and I were essentially winging it. My best friends were well on the way to careers as a pilot, dentist, Park Ranger and entrepreneur.

By now you may be wondering what all of this has to do with the weekly topic. Then again, maybe you are wondering why I never developed passion for anything. Or perhaps you have guessed that I essentially drifted through life unable to commit to anything career wise. Who wouldn't want to commit to repossessing mobile homes, Pacific Finance or one of the other snooze fest jobs I encountered along the way. In my case it was always easy to get by. Lynn had found something she enjoyed and was good at so I was supportive, and that got us transferred across the country twice.


Long story short, we ended up in Los Angeles and I ended up joining RadioShack in 1977 and other than a stint as a contract programmer for a few years was there until they went bankrupt and I joined the ranks of the retired. I spent 30 plus years working in the electronics world.

I have managed to live a fairly decent life, but find myself wondering what could have been had I ever developed real focus - what would have been different?

No - I am not feeling sorry for myself. I accept full responsibility for where I am and how everything got to this point as I enter the drain circling stage of life. I simply made a huge mistake early on and should have worked harder at developing the passion required to be really successful - then again, making a lot of money was never the most important thing to me. Perhaps things ended as they should have. As I have said on occasion in this blog, life is what happens when you are busy making other plans. I guess I should have figured sooner that time flies whethet you are having fun or not.

Check what Ramana has to say here,

Commitment - a willingness to dedicate yourself to something.  That's something we all face daily in life. It is something we start at an early age - or at least we should. We should commit to getting the most put of pur educational opportunities on school, to doing our jobs to the best of our abilitities, etc..

Our commitments and our ability to maintain those committments go a long way to determine our success in life. My blogging cohort, Ramana and I have in common a commitment to our respective marriages. We both were primary caregivers to our respective spouses when their health failed after many years together, something we both never gave a second thought to. In my hcase the final 10 years of Lynn's and my life together were dominated by her struggle with Huntington's Disease. I wrote previously about our relationship in February of 2014 here.

Vince Lombardi, a famous, successful American football coach said, "The quality of person's life is in direct proportion to their commitment to excellence". If something is worth doing, do it the best you possibly can, whether it seems trivial or not. No job is to trivial to be given anything less than your best effort.

Another fairly simple commitment is that made by Ramana and I to post a weekly blog. Clearly not all commitments are life critical. Some - like the 2-on-1 blog are simply for fun and relaxation. Like nearly everything in life, commitments should help keep a degree of balance. Personally, I think everyone needs to make a commitment to do as little harm as possible and leave the world a better place than it would have been without us.

This weeks topic asks the question "Did school prepare you for the real world? ". My answer is no, not at all if the school discussed is everything up to and including high school.

School did very little beyond teaching me to read and write. Granted, those are important skills required for any level of success in
life but they stop far short of preparing anyone for success.

Somehow our schools need to find a way to inspire students to discover what interests them and points students in a direction that leads to a career. In my high school there were vocational classes that focused on blue collar careers like
welding, auto mechanics and carpentry. Sadly, those have not been available for decades. No budget for them.  That is, in my opinion, rediculous.

Our college system does offer the tools necessary to launch a career. The trick is to get into college and then graduate without a crippling mountain of debt. My BA cost me a total of about a thousand dollars. I attended a state university that was essentially a commuter college - and also a community college (also called a junior college). There are opportunities available, our students need be aware of them.

That brings us to the students. Today's world is unlike any previous. The pace is faster, changes more frequent and information more readily available than ever. Along with that information is its evil twin, misinformation. Now more than ever it is critical to verify information and that is equally important when it comes to education choices. It starts with the parents, flows to the student and finally the educators.  Garbage in, garbage out definitely applies. You get out exactly what is put in, and now more than ever students need to be prepared.

While it may not be possible to earn a 4-year (well - six in my case 🎓) for only a thousand dollars like mine, it is possible to earn that degree and start a career. It requires hard work, and whether or not today's students are  up to the challenge is a topic for another
week.

I picked this week's topic and so Ramana will choose next week's. Be sure to check Ramana's take on this week's here.

This week is the first weekly post from 2 on 1 - the dynamic blogging duo otherwise known as Ramana and shackman ☺. Ramana selected Museums as our first topic.

Museums come in all sizes and subjects. My particular favorite is the National Air and Space Museum in Washington, D.C.. I visited the museum on July 6,1976. That was a particularly good time to visit D.C. and the museum, being our bicentennial year. Just seeing the selection of flying machines hanging from the ceiling and sitting on the floor is mind boggling. 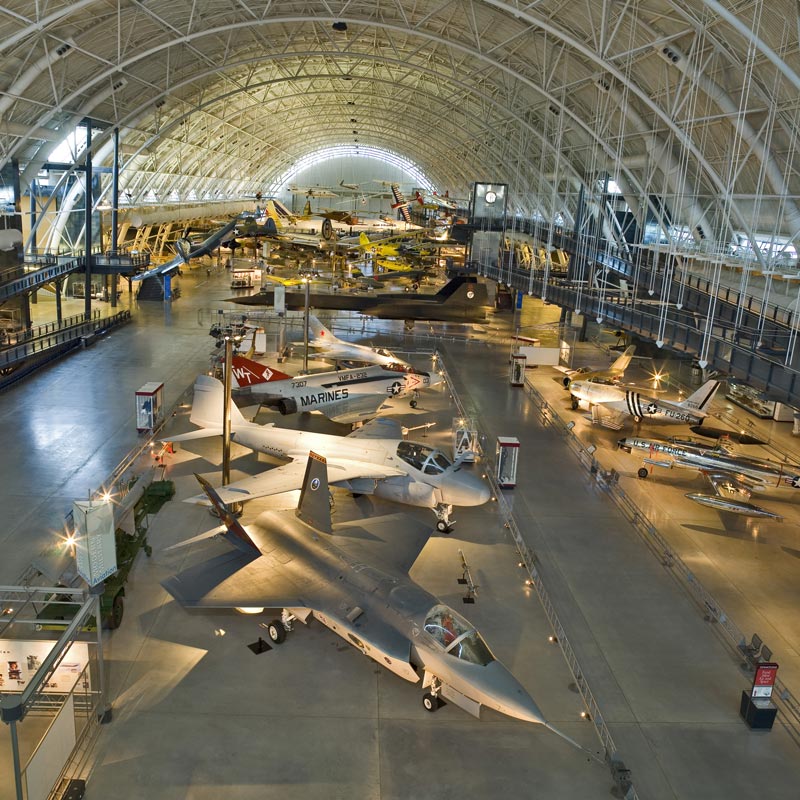 As you can see by the image, the museum has a substantial footprint. Not only is there much to see, there is much exercise to be had.

Museums offer a place to preserve artifacts and history, and can preserve aspects of history that may be offensive to some but should be preserved. An example of that is the display of Confederate icons of the Civil War as statues on public grounds. Some are offended by the public display of the supporters of slavery while others say we should not deny our history. A reasonable solution seems to be displaying those icons in museums open to the public. It is an example of political correctness that might work for everyone. Of course it can be carried to extremes if you consider that our country was founded essentially by white slave owners.
Like life in general, things are more often shades of gray, not simpler black and white.

Another favorite place of mine is Mesa Verde National Park, where you can explore Anasazi cliff dwellings and visit the Chapin Mesa Archeological Museum. Click this link if you are interested in seeing related info Mesa Verde.

Prior to our interstate highway system becoming s network of freeway systems, there was Route 66. Route 66 passed through the myriad of small towns and past an endless array of small, local musems. Though its glory days are long gone , there are still many Route 66 museums to visit - Route 66 Museums.

That's a quick look at this week's 2 on 1 topic. Be sure to check Ramana's entry here
Ramana