This week's topic was suggested by Ramana. Effectiveness - the degree to which something is successful in producing a desired result; success.

These days they seem to call these things "metrics".  You measure the effectiveness of something by checking its metrics.

So how effective has your life been? That depends on the metrics you value. Money in the bank? Successful marriage? Successful kids? Good friends?

The metrics you pick matter because  happiness does not always equate with good metrics - I know  lot of unhappy people with fat bank accounts. I know very few unhappy people that have successful marriages or happy kids. And most happy people I know have what they consider good friends.

I suppose it is natural at this stage of  life - the circling the drain stage - to reflect on one's life and offer some conclusions as to whether or not that life has been effective. Will you be leaving the world a better place than it would be without your presence? Sorry folks - I am not interested in public exposure of my life. Those who know me well have a clear notion of what I think.

That is it for this weeks topic. It frankly proved more personal than I expected. Be sure to touch base with my LBC  cohorts to see what they have to say.

Ramana
Posted by Shackman at 8:17 AM 2 comments:

Perceptions - according to nearly every manager I encountered in my business career - are everything.   Even more important than reality.  Imagine that - what people think is often more important what they know. As curious as that sounds, it was often proven true in business.  Here's  an example -

As a salesman I was often told to "sell the sizzle", giving the impression you really understood the product when in fact you simply hit a few high points and close hard. Personally I found that process offensive as hell. I have never liked being treated that way s a customer and so I refused to treat my customers that  way. Considering I counted the Hell's Angels in my client base, I think my readers might see the reasonableness of that attitude. Ahem.

While I was rarely at the top of the sales lists my return rates were the lowest. My net sales were excellent. My  buddy Mark Stout was an example of the best of both worlds. If he could close a deal quickly selling the sizzle he did so. But the reason it worked was simple - Mark KNEW the products inside and out and there was nothing  he could not answer.  Mark taught me everything I knew about computers when we worked together.  I imagine every salesman can share a similar experience.

Things get dicey though when perceptions meet politics. When does power speak to truth?  In an ideal world politicians would all speak the truth. Unfortunately, the truth in politics is most often in the full-spin zone. Read the tweets of POTUS 45. Fact check them yourself if you do not trust the media. I think you will find  POTUS 45 uses a different dictionary than the rest of us, With a falling approval rate it appears he is no longer considered the honest agent of change he claimed to be. Personally I never bought it as his behavior was so outlandish. Luckily his opponent was the (IMHO) most rightly reviled politician in the USA.

To date POTUS 45 has offended our 3 strongest allies, but he is still trying to build that wall. But I doubt anyone thinks Mexico will pay fo it. And his attempt at repealing and replacing "OBAMACARE" will remove 24 million people from the insured rolls. Ironically many - if not most of those - are from counties won by POTUS45. Somehow I do not think this will go down well. And I also personally find his labeling of the mainstream media an enemy of the people to be dangerous and offensive. I think he is well on his way to a one-term presidency unless he steps in some magic dust soon.

I wish I was wrong but I think my perception of POTUS45 is accurate. You see - he is my president and I and my grandkids have a huge stake in his success or failure.

This weeks topic was offered by Pravin. See what my cohorts have to say at Ramana, Pravin
and Maria

Back in my Junior High  (7th and 8th grade) days I was introduced to the concept of penpals - someone you meet and begin a relationship with based on writing letters. In a sense, it was the social media of the day - the very early sixties.

The concept was simple. A company called Internationl Youth Service in Turku , Finlnd awould for a nominal fee send you the name and address of someone with the similar interests as you and you would simply begin corresponding with them. Although they ceased operation in 2008, you can read about IYS here.

One of the first names I received was Dieter Eiche - I even remember his address - Fliserstrasse 11, Balingen, Germany. We corresponded regularly, usually once monthly for four years during our high school years. He  entered the military after graduating and we only occasionally corresponded for a couple more years until we stopped. But we had formed a fairly strong friendship and it was truly one of the most enjoyable things I have ever done.

We moved to Texas in 1994 when the electronics industry in the SF Bay Area went into the tank. Small companies I was doing consulting  and custom programming for could suddenly get PHD level help for the  same fees I charged so Lynn and I hit the road.  About 4 years after the move, I ws sitting  at my desk in Fort Worth when I received an email from Dieter. I was stunned and delighted. We quickly traded a few emails and caught up with each other. Dieter was a Judge in Germany. 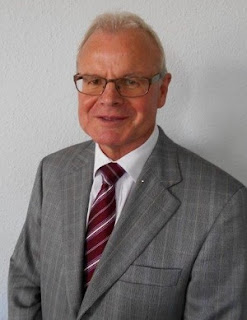 Here is a photo I found of him on the Internet.  And, although we are no longer in contact with each other it was fun catching up.

Letter writing is considered passe in these days of texting, email, blogging and the many forms of social media. Blogging, frankly, has replaced penpals for me. The net result is the same - I get to interact with people all around the world and I have developed strong friendships that make the entire blogging effort worthwhile. There are Ramana, Maria and Pravin in India, Ursula in the UK, a few in Australia and of course many here in the  U.S.A.. I heartily recommend blogging as a way to meet people, enjoy discussion/debate and even argue (civilly of course). If you are shy or do not know how to start, a blogging group like the LBC is a great place to start since the entire group writes on the same topic every Friday.
Posted by Shackman at 8:59 AM 2 comments:

This weeks topic is Peace. The absence of conflict. Wikipedia says "a lack of conflict and freedom from fear of violence."  It sounds simple yet history shows it to be nearly unattainable. An Impossible Dream of sorts.

There is a line in the song -"to be willing to march into hell for a heavenly cause." History is full of conflicts fought in the name of one god or another.  The Crusades saw Christians
attacking Islam. We live in a world marked by terrorist attacks from a radical sect of Islam against the West.

There have been wars fought between nations sharing common religions - so clearly religion is not a cure all for conflict. Christianity is split between Catholics and Protestants. Islam has Shia and Sunnis. Ireland and its troubles show how violent conflict between Catholic and Protestants can be and our incursion into Iraq showed the schism between Sunni and Shiites.

Pick a period in history and at best you might find the occasional peaceful region. Per Wikipedia,  the longest continuing period of peace among currently existing states is observed in Sweden, which has had peace since 1814 (for 203 years; if Swedish participation in the wars in Afghanistan and Libya is not considered) after its loss of major parts of the country to Russia in the Napoleonic wars. Swedish peace may partly be explained by its geographical position, partly by non-participation in military alliances during peacetime, resulting in a certain level of Swedish neutrality during wartime, and partly by the periods of relative peace in Europe and the world known as Pax Britannica (1815-1914) and Pax Europaea/Pax Americana (since 1950s).

Other examples of long periods of peace are:

That is not a particularly impressive record for humanity's time on this third rock from the sun. And with more nations reaching for their own version of the brass ring. More changes. The stage is set for additional conflict. Global resources are shrinking and - for whatever reason - the global climate is changing. We have the capacity to eliminate life on the planet with nuclear weapons so clearly it is in our best interest to keep working on the peace process. The answer has to be out there somewhere.


I am essentially an optimist and expect things to work out although the current polarization in politics here does have me worried a bit - especially when the chief advisor to our new president has a stated goal of destroying the administrative state. But that is a topic for another day. Me? I will continue commenting on things, and listening to music that matters to me while I watch my 7-year old grandson does  little boy stuff with reckless abandon.


That's a quick shack take on the topic Ramana gave us this week. Be sure to check the other LBC folf for their takeon the topic - Ramana  Pravin and Maria

This weeks topic was offered by Pravin. Food for thought - something that requires serious consideration.  Think before you speak. Heck - what fun is that? Ahem. Well - a little mental stimulus is always a good thing.

As a general principle, thinking before engaging your mouth or fingers is always a good thing. Often the best thing to say is not the first thing that comes to mind. While you cannot change the wind you can adjust your sails to reach your destination.  The only person truly responsible for your life is you. Believe in yourself - if you don't others will recognize that fact and likely will not believe in you.

I do see a certain irony in the fact that this week's  topic has left me virtually speechless. Would you believe I am still pondering my response?

Better see what my cohorts have to say - Ramana,  Pravin and Maria.