Ramana suggested this week's topic - Sports in our lives. You might say he lobbed me a softball this week. Be sure to check his take on the subject here.

I am what is jokingly referred to as a jock gone to seed. Older, slower, fatter than in my halcyon days. Now some of that is due to the abuse I heaped upon myself all these years - those Xs in front of the L on my frame compounded the wear and tear to the point that I now get around on what I laughingly call stereo walking sticks - aka crutches. My knees are shot and I simply refuse to have them replaced - I have friends who have almost died due to that surgery although my brother has had both of his replaced and thinks I should go ahead and have the surgery. No thanks. 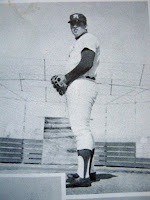 From the time I was very young, all I ever wanted was to be a baseball player.   I loved to play baseball and anyone who has seen the movie The Sandlot knows what my life was like. I managed to keep that dream up through high school -that's me my senior year glaring at an imaginary hitter from the mound. It is also somewhat clear from the photo that it is body by football at 6'2' and 270 or so. I also wrestled so I was a three-sport jock. That certainly kept me busy and off the streets - all good for a shy guy like me.

For the record, I still miss pitching - LOL - some dreams never die. I became a two-sport jock in college - shoulder injuries and reality set in - no more baseball, but I did enjoy 25 years or so of softball, dabbled in golf, tennis and played very aggressive handball and racquetball well into my forties.

On New Years Eve in 1968 I went to a party at my friend Anne Amundson's house and my life was changed forever as I met my future wife Lynn. You can read about that  meeting, our life together and her struggle with HD here.

Lynn was a gymnast at BYU back then - these images are of her working on the balance beam in her backyard in Oakland, California. Not shown is the cement patio under the beam - and people called me crazy. 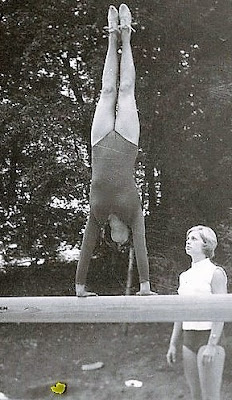 During the summer of '69 when she came home from school we began dating in earnest. Our early dates could be as simple as just playing catch as she was also a softball player. We attended softball games, both spent the summer working for the Oakland Recreation Department and developed a relationship that would last for 46 years, until her death. We raised two kids - I coached them in soccer, softball and baseball. Sport was always part of our lives. We also did a bit of white-water rafting and for a few years went skiing regularly.

These days I am relegated to the status of a fan. I enjoy watching baseball, football and hockey but honestly I am not what you can call an avid fan - unless my San Jose Sharks are in the Stanley Cup playoffs or TCU (Texas Christian University) - my fave college football team - is on TV.

I was never much of a jogger and I literally ran my last lap the day of my last football practice. Again - mine is not a body built for jogging. Although I love the mountains, hiking is not on my bucket list. It is not lost on me that perhaps if I'd had a different attitude maybe I would not have so many Xs in front of that L on my buffalo petite frame if I had been a runner. Clearly, 12 oz. curls (the weight of a can of beer) were not sufficient.

That's it for my take on this weeks 2-on-1 topic. Check back next week for another round of 2-on-1 where my good friend Ramana in Pune India and I tackle the same topic.

It has been a long while since I had a weekend getaway spot - way back to the pre-Texas days.  Lynn and I used to spend Labor Day weekend in Monterey/Carmel. It was our goto spot. It was a quick, beautiful drive from our EastBay home and a trip we very much looked forward to. 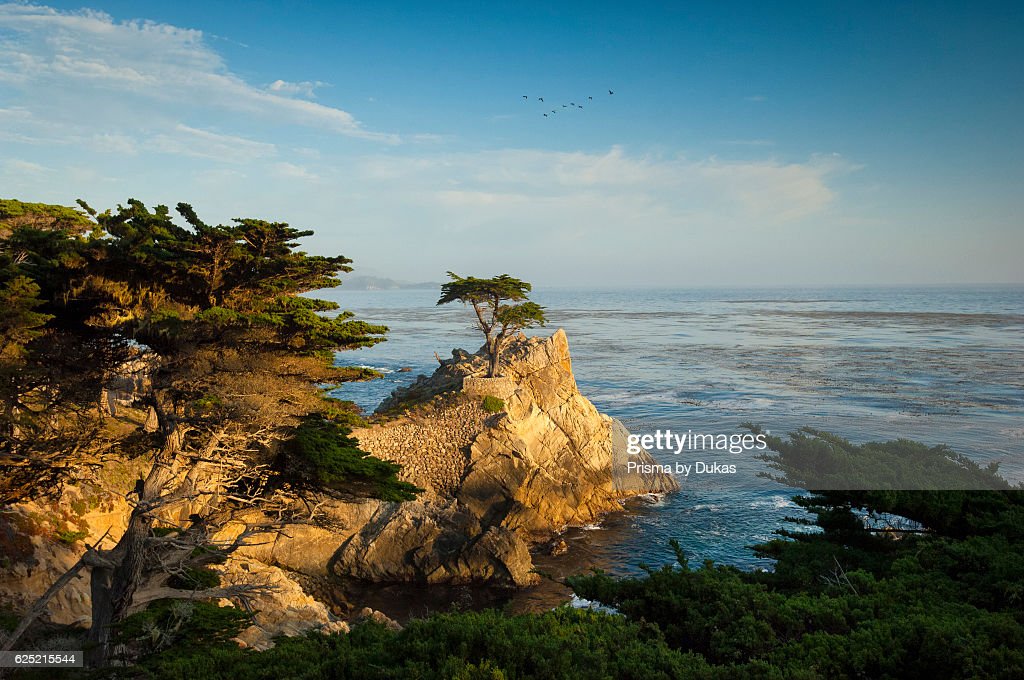 The weekend always started on Friday evening, occasionally Friday afternoon if we could coordinate an early getaway from work. We lived dangerously - we never made motel reservations as finding a place to stay was part of the adventure. We'd secure a place to stay and then head over to the Del Monte shopping center and Marie Callender's Restaurant for dinner and drinks.

Not only did Marie Callenders have great food, they poured a mean Long Island Ice Tea, a fave of mine. Lynn was fond of their fettuccine alfredo and I loved their pot roast, stews and other things. After dinner, we'd head back to the motel and get a good nights rest and be ready for the Saturday fun.

Sunday we would have Sunday Brunch at one of several places and then we'd act like tourists and just drive around and check out the amazing scenery on the Monterey Penninsula. 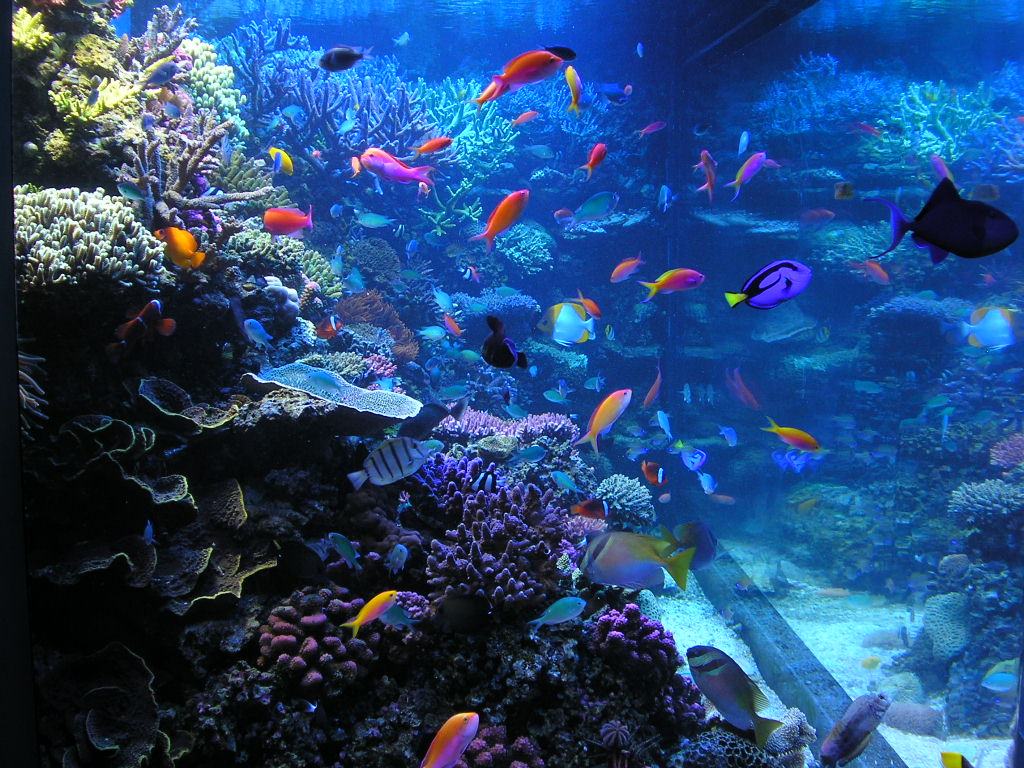 Saturday morning we'd grab some breakfast and plan our day. We'd either head off to Carmel to hit up some of our favorite shops. Carmel was full of boutique type shops and there were enough books shops and music stores to keep me occupied while Lynn hit up gift shops, clothing shops and anything else that struck her fancy. If we did not go to Carmel we'd head off to Monterey and Cannery Row for a day of shopping and a visit to the Aquarium that David Packard of Hewlett Packard fame built so his daughter Julie would have a job. (She was the Director when the Aquarium opened).Packard, incidentally, was born in my home-town - Pueblo, Colorado.

A full day of shopping or wandering through the aquarium petting rays and whatnot typically left us worn out so we'd head back to our motel. We'd typically grab a light  dinner at some little seafood shack or fast-food joint and retire for the evening.

Sunday we would enjoy Sunday brunch at one of several places and then typically take a drive around the Monterey Penninsula enjoying the spectacular scenery.

Monday morning would see us heading back home at a leisurely pace, always stopping at a place called The Giant Artichoke in Castroville to stock up on bags of fried artichoke hearts.  Then it was back on the road headed for home.Be sure to see what Ramana has to say by clicking here
Posted by Shackman at 9:52 PM 7 comments:

This week's topic is my suggestion- Do you have a code that you live by?

There's a great line in the tune above - you, who are on the road, must have a code that you can live by.. The current tribalism on display daily made me wonder just what exactly is it driving this madness that makes hypocrites out of so many evangelicals? What spurs the pure hatred of the far right and left?

Contrary to the desire of evangelicals, the USA is not a Christian country - it is a country founded on Christian principles. Most people born here are raised and hear some variation of the 10 commandments daily. Those rules - that code - is Jewish, offered allegedly to Moses by God some 350 years before Christ appeared on the scene. My code is not surprisingly taken from those 10 things, though some might argue there were originally more than 10.

My personal code is drawn from those

Admittedly in these tribal times on occasion, some of those parts of the code can be difficult to live up to. I admit to having a substantial temper that I work very hard to suppress - but at times it does rear its ugly head. I can honestly say that when that happens it is very rare that something good happens.

Over the years I have been exposed to many different "codes" from many different sources, including religions and other philosophical sources. These days, Ayn Rand's morality of selfishness is evident in the daily activities on of our  (in the USA) government, as led by POTUS 45. Her Objectivism - parts of which have always been championed by conservatives, are more popular than ever and so it is against that backdrop that my meager little code tries to get me through each day.

You can boil my code down to work hard, treat others fairly, be yourself, tell the truth, learn something every day and be who you are.

To see what my blogging partner has to say, go here Ramana.

Ramana suggested this week's topic, "There is nothing new, except what has been forgotten" - Marie Antoinette. It is a sister quote, if you will, to "Those who cannot remember the past are condemned to repeat it" by George Santayana in 1863. Then there is the more common "there is nothing new under the sun". So, everything that is is as it has always been.


How many times have you eaten a bowl of ice cream too fast and ended up with that classic brain-freeze headache? How about a hangover the next morning after a few too many Margaritas (or the adult beverage you prefer).

There are, of course, several more serious examples that validate our weekly topic. If we are to ever progress as a culture, we must study the past so we do not repeat its mistakes. That notion and a widely held belief by many here that our political system and government are allegedly corrupt and broken led to the election of POTUS 45, our current embarrassment who has caused an employment boom in fact-checking as he lies so much. Alas, Mr. Drain the Swamp has simply deepened the swamp and restocked it with a fresh batch of so-called born again sycophants and crooks like Rick Perry (former) and Scott Pruitt (latter).  Sometimes, perhaps, what we view as bad is not really bad, or we make an even bigger mistake in our attempt to fix the perceived problem.

Is life really simple? Do we really overcomplicate things? Would we really be better off living simpler lives? My friend Tammy would certainly agree - she is something of a minimalist. In my case, I am well aware of the beauty of the simpler things in life but circumstances in which I exist require much more than the basics, though many people do forget that sometimes simpler is better. In this country, the prevailing attitude is to make each day better than the one before. Companies can never be satisfied with their level of profitability - it must always be increased. We live in a world wherein satisfaction can only come from growth and getting bigger and better - or so says the daily marketing and advertising we are bombarded with.  We sure do keep big Pharma busy providing us with stress meds and of course there is the drug problem.

Perhaps we have forgotten.

That's my quick shack-take on this week's topic. Be sure to stop by Ramana's blog to see what he has to say.