This weeks topic was suggested by Ramana.

wikipedia says "Loyalty is devotion and faithfulness to a cause, country, group, or person." Thnat is a reasonable definition as far as I m concerned. Loyalty can be a virtue or  not. Consider the loyalty Hitler's followers exhibited.

In my experience there is no loyalty as pure as the loyalty a dog feels for his/her human. That was made abundantly clear to me recently when I had a 4-day stay in the local hospital. It started when I was snatched from home on a gurney by four burly emts on a Saturday night. Ginger - my dog - was initially quite upset and barking at them until she realized these people werlatere helping me. Then she was practically inconsolable while I was in the hospital. She spent the days lying by the door waiting for me to return. 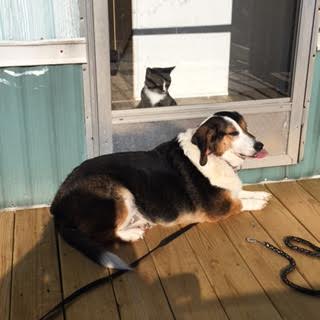 Four days later when I returned she was wild with excitement. She seemed to understand that I was very weak and she waited until I made my way to the bed to jump up and snuggle in as tightly as she could get. She laid her head on me and gave her best doggie sigh. Now that I am almost back to normal sheis more playful. She is also quite clever - my normal attire is a pair of shorts. Ginger has figured out that if Iput on long pants I am going somewhere and she immediately heads for the front door, where she remains until it is time to leave. As soon as the door opens she dashes out, runs down the stairs and waits by the driver side door to take her place in the back seat. truth be told, I enjoy the company.

Personally, I am very loyal to my family and friends. I am fortunate to have some friends that I have known for over 50 years. They have always been there for me and I for them.  We live on opposite sides of the country but that does not matter. When Lynn died 3 years ago 4 days later 3 of them showed up in Ft Worth to check on me. That is loyalty.

That is my quicjk take on this weeks topic. Be sure to see what my choorts have to say ontheir blogs - Ramana, Pravin, Maria.

This week Pravin asks us "What would you do in the long term?"


That's an interesting question for someone in the "circling the drain" age  bracket. For clarification I'd say anyone above say 65 is in that category.  Hopefully your tub was very  full and your circling becomes an interesting, long journey.

So what would I do? Well- it depends upon the circumstances. I certainly will not be taking out any 30 year mortgages or purchasing a new car,  although if I should win 10-15,000 dollars in the lottery there could well be a motorcycle in my future. An 1100 CC Suzuki. And then a long road trip.

Yeah - I know. That is simply wishful thinking. In reality to avoid the drain I need to take better care of myself.  DO stuff like watch my diet, take my meds - line big pharma's pockets with the outrageous prices they charge. Without those meds my drain looms  large, deep and very close.  I tell ya - at times this getting old stuff really sucks but the journey to this point  has been interesting and somewhat enjoyable.

I certainly will be watching how the country fares under the new president. He has chosen a few good cabinet members and some real turkeys.  It is the last stand of the baby boomers - we are aging rapidly. It is time for the next generation to assert itself in the political arena and that will also be fun to watch.

Upon reflection it appears in the long term I will be doing a lot of observing.  That seems reasonable for a retiree - I will also be increasing my blogging output while also keeping up with the weekly LBC posts.

Be sure to see what my cohorts have to say

This weeks topic comes just as we here in the USA are preparing to inaugurate our next president while we begin the vetting/approval process for his cabinet selections. It marks the end of a contentious election on the heels of an equally contentious BREXIT  election in the UK.

Politics are pervasive. They intrude upon every aspect of our lives and these days  of  severe polarization leave very little room for respect for the other side's point of view. That in turn leaves both sides demonizing the other. This went on for so long here in the USA that we elected a  businessman that patted himself on the back for his multiple bankruptcy filings and bragged  about how he was so smart he paid few - if any - income taxes.  He vowed to make America great again.  We will see how that shakes out over the next four years, even as people like Cory Booker  and Marco Rubio begin  posturing for future runs at the presidency from their parties.

It seems that politicians here seem to care more about being elected/re-elected than anything else. No small wonder when you realize the benefits and salaries - including "pensions" for life involved, not to mention the lucrative lobbyist positions that seem to gravitate to former politicians.  It is worth noting that our billionaire president-elect has said he will not accept a salary for his term in office.

Although Trump won the electoral college vote he lost the popular vote by nearly 3 million votes. Not quite the landslide he claims and it has sewn the seeds of discontent.

Marketing is as important as ideas in elections these days.  Maybe  even more important.  Ask Bernie Sanders. Toss in a few dirty tricks to make it even tougher on the idea candidate.

All of this is made possible by a disinterested electorate,  one where nearly half of those eligible do not vote. Too many years of broken promises and missteps.  And now a new generation is ready to assume its rightful place in our society and their ideas and attitudes are quite different than ours. Once again the times they are a changing.  Watch the right wing scramble to leave  their indelible mark.  It is all politics - and it is going to be an interesting ride. It is almost like the sixties all over only now I am in the older generation.   I wonder if my parents felt the same way then as I do now.

Email ThisBlogThis!Share to TwitterShare to FacebookShare to Pinterest
Labels: Although Trump

Off we go into 2017 with a topic picked by Ramana. Imagination. Wikipedia says imagination, also called the faculty of imagining, is the creative ability to form images, ideas, and sensations in the mind without direct input from the senses, such as seeing or hearing.

“I am enough of an artist to draw freely upon my imagination. Imagination is more important than knowledge. Knowledge is limited. Imagination encircles the world.”  ― Albert Einstein

It is often said that if we can imagine something we can produce that thing. I am not sure that is true in the real world but it certainly provides the impetus for creativity and new ideas which lead to progress and change.

One way we let  our imaginations run wild is through day dreaming. We let our minds wander.  Remember Buck Rogers, Dick Tracy and other cartoon characters from the last  century? Space travel is now real. Wrist TV and radio are real. They were imagined and now they exist in the real world. Someones idea inspired someone else to pursue that idea for real.

We are fortunate there are day dreamers -  people with wild imaginations. The world would be a dreary place without them. The arts would be very different indeed. Technology? WHo knows where we would be without the dreamers.

“Imagination is not only the uniquely human capacity to envision that which is not, and, therefore, the foundation of all invention and innovation. In its arguably most transformative and revelatory capacity, it is the power that enables us to empathize with humans whose experiences we have never shared.” - J.K.Rowling


All of that said, I must confess to being one with a limited imagination. I am much more  suited to implementing ideas - not coming  up with them. It  has always been that way.

Check out what my cohorts have to say.