Time is on my side

An appropriate beginning.  I'm on vacation this week, not all dressed up but still nowhere to go.  So here I sit rambling and muttereing.

Yesterday Texas gained the distinction of pushing Mitt Romney over the top.  He now has sufficient votes to be officially called the Republican nominee so now let the mudslinging. baclkbiting and doublespeak begin in earnest. On a brighter note - a Mormon running against a half-black sitting president.  Who woulda thunk.


Anyone familiar with the movie Sandlot is essentially familiar with my childhood from the age of 10 on.  It was stunning how similar the portrayal of the kids in that movie was to the way things were in Hayward, CA back in 1959-1964 or so. A gang of kids off to the nearest field to play baseball. 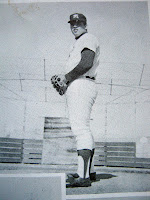 The pic above is from my HS playing days and happens to be the only pic ever taken of me that I like) At times that field was a large parking lot in what eventually became Southland Shopping Center. If we weren't playing baseball  we were digging forts in vacant fields.  Several were deep enough to stand in - covered with old doors, wood - anything handy.  We never gave a thought to one of our forts collapsing in on us and they never did.  Basically, from about 8:30AM til 5:00 PM my friends and I were out running around playing.  Except on Tuesdays when one of the local TV stations ran a horror movie.  Then several of us were gathered around the TV to see somthing like The Thing, The Blob, Them, Tarantula - the list goes on and on.  Movie classics all.  At least to a bunch of 10-12 year olds.

We played Little League.  We did not all get trophies at the end of the season. If we lost the game we felt bad - we wanted to win. Sure we knew that we wouldn't always win but we wanted to.  Too many kids these days are cheated our of an important life lesson - losing sucks, and losing should spur you on to wanting to do a better job next time so you can win.  Nobody wins all of the time.


Everyone really needs to learn how to lose as well as learn how to win. Sportsmanship is important.  I love the fact that hockey always ends a  playoff series, olympic game, world championship tournament, etc.  game with the two teams lining up and the players trading handshakes. It is a great reminder - it is a game. They PLAY the game. Just like this -

That movie is one of my all time faves btw.  It's definitely a movie - not a film.

In many ways I suspect my childhood was not atypical.  It is - afterall - where I met those people who became my lifelong friends and role models that helped keep me on a straighter path them I otherwise would have explored.

Politically correct. Wikipedia says: The central uses of the term relate to particular issues of race, gender, disability, ethnicity, sexual preference, culture and worldviews, and encompass both the language in which issues are discussed and the viewpoints that are expressed. Proponents of the view that differences in IQ test scores between blacks and whites are (primarily or largely) genetically determined state that criticism of these views is based on political correctness.
Examples of language commonly referred to as "politically correct" include
So in essence what we have is an excuse to be intentionally obtuse when the old-fashioned, more succint term was more often than not perfectly acceptable.  Why say in one word what we can say in 2 or 3.   And that's progressive???  "Political Correctness" is a manner of expressing ideas that is based on the misconception that it is possible to pick up a turd by the clean end. (no - that is not an original thought but why bother restating the obvious when it has already been done in such a succint manner???)

Now don't get me wrong.  Some of the examples above make perfect sense - firefighter and police officer being prime examples. Largely, however, common sense has been supplanted  by politically correct doublespeak.  In our attempts to not offend anyone we have created a situation in which too often people use political cortrctness and doublespeak to mask the fact that they are not taking a position on anything. They are cleverly using rhetoric that makes what they are saying seemingly make sense to supporters of both sides of an issue.

Is anyone but me surprised that professional politicians are not champion cyclists??  Nobody - and I do mean NOBODY can backpedal as fast as a politician. We need new cycling events in the Olympics so the polsd can display their prowess!

IMHO the biggest danger posed by PC is the the loss of open and honest communication. A an example I submit - That hearing impaired, mute, visually impaired young male individual sure plays an incredibly proficient and aggressive game of pinball  as a replacement for "That deaf dumb and blind kid sure plays a mean pin ball!"

And lastly - is this song politically correct?????

I started out as a child - aka Alfie part deux

My apologies to WIlliam H Cosby for borrowing his line in the title.  I always thought it was pretty darn funny.

Funnily enough, through the years friends often asked me why I never pursued info on Wes.  I simply wasn't interested - I already had a dad - Jack McConvey.  Why bother with someone that clearly had no interest in me. But then there were some nagging things that kept cropping up and some parts of my basic nature that simply didn't mesh with my family as I knew them. I mention again the dark side. Clearly Wes was a troubled individual as those pieces of my personality I can attribute to him are not pleasant at all.  If interested he can be viewed on my Facebook page in the Family and Friends album.

Wes clearly was not as fortunate as I to have a group of friends as solid and stable as those I aquired upon moving to California just prior to entering the 5th grade. Those guys have remained close over the years and were honestly the primary reason I turned out the way I did. They set a high bar to live up to and I was just insecure enough and shy enough to want to emulate them.  Other than becoming a successful professional as they did (architect, dentist, airline pilot for starters) I succeeded IMHO.

So why did my mother lie to me until her death?  Guess I'll never know. It does explain though why she had a better relationship with my brother and sister.  Technically they're half brother and sister but that has never been part of the lexicon for any of us. The biggest issue between them and me is generational - I'm 10 years older than my sister and 11 years older than my brother.

Fast forward a bit.  So here we are today.  I am primary caregiver to my wife, who suffers from Huntington's Disease - and supporting my daughter's family as they live here with us so my daughter can help with her mother.  Luckily I work at home full time as it only takes a computer to be a copywriter/content specialist.    Obviously I spend a lot of time on the computer - it's how I relax as well as make  a living.  Not exactly the life I envisioned for myself when I was young but these are the cards I was dealt. So I play them.  I am occasionally bitter that the end of Lynn's and my life has been stolen by a genetic condition that may yet affect both kids (each has a 50% chance of having HD. And if one of them has it there are the grandkids to worry about.) I am constantly irritated by the fact that Lynn has had a third of her life taken from her and she is slowly succumbing in a most dehumanizing manner. She did nothing to deserve this but as they say - bad things can happen to good people. If there is a god she clearly is humorless. Kharma?  Who knows.  I guess until the switch is turned off on me I will keep looking for answers.

This one's self explanatory....

My  sperm donor - Paul Wesley Brooke  (aka Wes)- was pretty much a forbidden topic all throughout my life and for whatever her reason my mother chose to lie to me about him from the time I was 13 or so.  And her dad - Harry L Higgins - was persona non-grata in the Higgins clan because my grandmother Sheila - who raised me for 9.5  years - was not particularly popular with the Higgins clan. My grandmother hated Paul. I have since found out why.  More on that later.

Why even bring this stuff up?  There's a  TV show on NBC called Who Do You Think You Are wherein celebrities trace their roots. I stumbled across it and became a fan. I think it's important a family know it's roots.

I spent some time a couple of years ago looking for info about We.  What I discovered wasn't particularly shocking other than the lies my mother perpetuated until her death. This guy was so bad his own family - the Brooke family -will not speak to me. His nephews - my first cousins - have both blocked me on facebook and one stated that because of Wes's "troubles" they simply couldn't be bothered.  Fortunately one of their nephews married a nice lady that went to Ancestry.com and developed a lot of their family history so it is available for me to pass on to my kids and grandkids. I always knew there was more to the story as every birthday and Christmas up througfh my HS graduation I received a gift from a mysterious Grandma Grace. And when I was about 13 I had to spend an entire day with a mysterious aunt and her family.  Guess I didn't make much of an impression as that was the last time I ever heard from her.  She supposedly stayed in touch with my mom but who knows.

So Wes old pal - I assume it's hot where you are but this one's for you.  Everything I am I owe to to not giving in to the dark side you gave me.  You spent your life in jail and hated by your family.  I now know why my dark side exists but you lose buddy.  I won.


That takes the sting out of the McConvey clan member that was so excited to find a McConvey in Texas that he emailed me and started up a conversation a number of years ago.  After a couple of emails when I mentioned I was an adopted McConvey I was politely told to not bother him again.  I hope he is still enjoying success in his cleaning business in Belfast.  I'm still entitled to call myself Irish though as the O'Higgins clan emigrated to the states and ended up in New Mexico. Somewhere along the way they lost the O' - perhaps Indians stole it in a raid on their stagecoach business.

Chapter II tomorrow.  This is proving to be cathartic.