Does Time Run Out?

Does time run out? Pravin asks that question of us with this weeks LBC topic. So what is time? Here is what DR. Neil  deGrasse Tyson says -

That is Dr. Tyson's definition. Merriam Webster says : 1) a :  the measured or measurable period during which an action, process, or condition exists or continues :  duration  b:  a nonspatial continuum that is measured in terms of events which succeed one another from past through present to future - Like Steve Miller sang, "Time keeps on slipping slipping slipping into the future"'


Tyson says "We are prisoners in the present locked in eternal transition between our past and our future."  Time is constant, it is our measurement (reckoning) of time that allows the notion of time running out.

As I queried last month when the topic was simply Time,  Since we cannot bring back the past is  time really anything more than the present? Is  the future  real before it becomes the present? The short answer is no to both questions in my opinion. But in reference to the period of reckoning,  time can run out. It is like starting a discussion with a disclaimer like "For the sake of this discussion, the sky is orange with green stars" or a stadium's unique set of ground rules in baseball.

Then there are the Spanish scientists who believe time is literally running out and will simply cease to exist. Granted - they are thinking it will happen in billions of years but it certainly does make one stop and think. You can read about that here.

In the meantime, you might as well enjoy the present in any way you see fit. Me? I'll probably listen to the occasional song about time -


Be  sure to check my cohorts blogs to see what they have to say about this week's topic- Ramana, Pravin, Maria and Ashok. 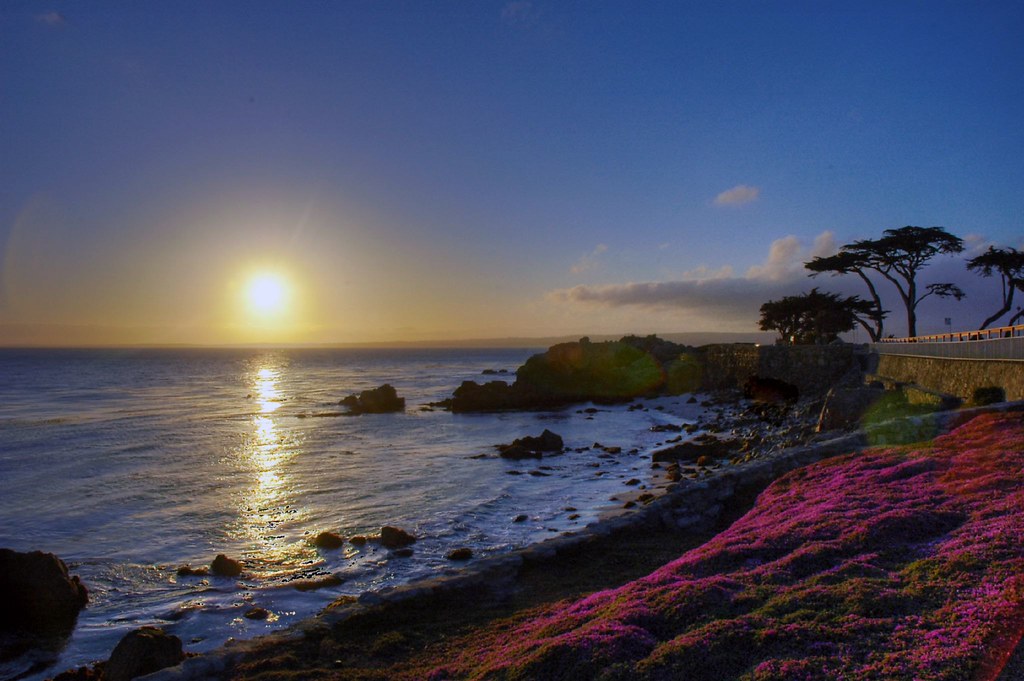 This week's topic was my idea.  Sunrise or sunset. Start the day or end the day. What is your preference?

Honestly, it is a tough question - a fresh cup of coffee and depending upon the season, a warm jacket makes almost any sunrise special.  I have been to the spot this shot was taken - it is one of my favorite places in the world - Monterey Bay in California. It is one of the many reasons I miss northern California - the best place I have ever lived.

The only negative about loving a sunrise is the early hour you need to get up to view that sunrise - unless of course, you are young enough to have been out all night and just happen to catch a sunrise that way. In my youth, I confess that happened on occasion. And on several of those occasions I had be to work by 8:00 AM - those were long days and much coffee was consumed.

Sunsets are equally as lovely and typically much easier to view unless you work the night shift. Here is a shot of San Francisco at sunset -
another of my favorite places and yes - another reason I miss California. I am not sure where the photographer was when this shot was taken - perhaps on a bay cruise or across the bay in Berkeley or Emeryville. I used to hang out at a great seafood restaurant in Berkeley called Spangers.  I have been away for so long it is now part of a large chain. But it did not have this view - even before several drinks. The seafood and sourdough bread were compensation for the missing view.

Ultimately I ll go with the sunrise as my preferred choice. It is the start of a new day, a new experience is about to happen. You have a chance to make it a great day. Give it a shot. and whatever happens, a nice glass of wine at sunset is a proper way to end the daylight portion of any day. Hmm - a cold beer is better on a hot summers day though.

Be sure to check my cohorts blogs to see what they have to say about this week's topic- Ramana, Pavin, Maria and Ashok.

Let's take Native American history for example. When told from a white man perspective, do you think it reads the same as from a Native American perspective? History is history, is it not?  We conquered them in battle and then we gave them land to build their "new" lives on. Such benevolent conquerors.

But we devastated their culture, took away their real lands and lied on most if not every treaty we made with the Native Americans.  Is that the same history from both sides of the equation? Bear in indthat history is typically written/recorded by the winners.

Consider next the enormous economic and industrial expansion that is the hallmark of the U.S.A.. Consider the industrialists here in the US that were known as Robber Barons - people that would do anything to get rich. Here is a list of some -


The people here are listed as  Robber Barons or in the various sources,

Times were different back then. It was the time of colonial expansion around the world. AT one time or another world powers included Spain, Portugal, Holland and of course England.  The landscape is much different these days.

Now, more than ever, alternative histories that attempt to tell the whole story are appearing. Gain the full historical perspective on any given time/event. Not surprisingly there is some resistance in certain quarters. Be sure to check multiple sources just as you should for news about current events. Remember - if we do not learn from history we are doomed to repeat it - or at least repeat its errors.

One final thought - it is not my intent to question every historical record - I am merely suggesting that you exercise caution and use good sense when studying history..  Now please excuse me while I research aligator canons..

...
`
Now more than ever alternative histories oare appearing. Histories that tell a full story - offering both sides of events. Now you can read the whole story and gain the perspective of both sides in the story. Of course, that is a source of severe consternation for some, and simply righting a wrong to others. It is up to you to decide where you fall in that equation.
Posted by Shackman at 9:28 PM 8 comments:

The Power Of Your Subconscious Mind

The Power Of Your Subconscious Mind - this week's topic - was offered by Pravin. It is a popular self-help book written by Dr. (Psychology PHD from University of Southern California (USC)) Joseph Murphy in 1963. Murphy was born in Ireland, raised a Roman Catholic but eventually left Catholicism and became a  divined minister in the New Thought  Church of Devine Science, a brief history of which is available here.

Murphy spent considerable time in India with gurus learning Hindu philosophy. I'll leave it to Ramana, Pravin and Maria to connect those dots to today's topic.

Murphy - in  The Power Of Your Subconscious Mind - says “The way to get rid of darkness is with light; the way to overcome cold is with heat; the way to overcome the negative thought is to substitute the good thought. Affirm the good, and the bad will vanish." To me that is a typical power of positive speaking notion. Nothing that has not been said many times before by other proponents like Norman Vincent Peale.

“I like money, I love it, I use it wisely, constructively, and judiciously. Money is constantly circulating in my life. I release it with joy, and it returns to me multiplied in a wonderful way. It is good and very good. Money flows to me in avalanches of abundance. I use it for good only, and I am grateful for my good and for the riches of my mind.”

“Trying to accumulate wealth by the sweat of your brow and hard labor is one way to become the richest man in the graveyard. You do not have to strive or slave hard.”
Now those are interesting quotes.  Positively think your way to happiness and fortune.  Frankly, if it was that easy I suspect the church of  Divine Science would be a bit larger.  As the city of my birth and subsequent first 10 years of my life played a large part in Divine Science and I have never heard of it until today seems to confirm it as a relatively minor player. That does not, however, lessen the value of  Murphy's ideas.
I find the inherent positivity of Murphy's notions to be quite valid as a roadmap for life. Those who know me know I am not particularly religious so I tend to dismiss god references fairly quickly.  But I have also been accused of being a spiritual guy - and in that light the god references make sense. I am not convinced there needs to be god to make them valid though I suspect Murphy and any person of faith would disagree with me.  Concepts of god would make a good discussion as it relates to Murphy's book. I am not, however, going there today. I will only say that when it comes to god U2 says it best for me - I Still Haven't Found What I;m Looking For.
I'll end this little ditty with one last Murphy quote from the book -
“Success means successful living. When you are peaceful, happy, joyous, and doing what you love to do, you are successful.”  Now that is something I can agree with completely.  I can see why so many folks are enamored of Dr. Murphy and his book.

Be sure to check on my cohorts to see what they have to say on this topic - Ramana, Pravin and Maria.