I wish I hadn't done that. 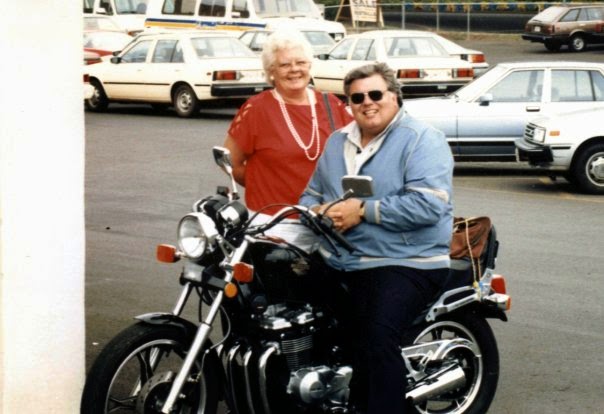 I remember sitting at stoplights in Hawaii gazing around and thinking I can't believe I am really here. That six months was truly a great time and I rode that Suzuki everywhere - rain or shine.  It got exciting a few times on H1 - the main drag - as since I did not wear a helmet I could hear cars racing behind me - the cops used to race on H1 all the time.  Back then they were given cash and chose their own cars - usually the muscle variety - and it was not odd to see a huge Samoan or Tongan in a black 442 or some other powerful, fast auto.

I remember taking a day off work and riding to the Norh Shore to watch the big waves at Waimea Bay the first day they hit. It seemed like half the population of Oahu was there - I stopped at Matsumotos and grabbed a giant shave ice (ice cream and beans of course)

and parked in the parking lot at Waimea and just watched in awe as the big waves broke.

Then there were the Saturdays I rode to the beach and watched the sail planes (gliders) swooping around doing their loops, whirls and vertical climbs just like Rocket J Squirrel.

One memorable evening I road home to Waipahu from Kailua 0 I had just been at my friend Dave DeCaire's house helping celebrate his daughter's birthday.As luck would have it it began to rain.  No big deal - it rained all the time.  But this instance it did not let up - I got a break going through the tunnel but as soon as I exited on the Honolulu side  the bike started to plane.  No wheels on the ground  - I was on water.  That was exciting.  Scary.  Pick the adjective.  The rain kept up until I hit downtown - and as I headed toward Waipahu it suddenly got very cold. I was in the small valley that passes the Halava jail.  Froze my you know whats off - LOL.  But eventually I made it home safely to Hiapo street. Rick & Laurie laughed their butts off at my appearance. I probably should have taken Dave's offer and slept on hIs couch but alas - I did not.

Nothing could beat cruising Hawaii on that Suzuki but there are some great spots in Northern California I would have liked to see.  Unfortunately Lynn was dead set against it so I left thje bike parked at Rick and Laurie's place and sold it about 3 weeks after I left.  Sigh.

Matrimony.  Marriage.  Psychology Today says  marriage is the process by which two people make their relationship public, official, and permanent. It is the joining of two people in a bond that putatively lasts until death, but in practice is increasingly cut short by divorce.  To that I say marriage is one of our oldest customs with many influences, in this country primarily religous  influences and legal ramifications.

What makes it so different from simple cohabitation?  Make no mistake - matrimony does change things in a relationship. The so-called get out of jail free card disappears - dissolving a marriage isn;t as simple as simply packing up your stuff and easing on down the road. Yet in this country nearly half of all marriages end in divorce.

My generation - the Baby Boomers - have spearheaded the so-called attack on the institution and later generations have picked up the ball and are running with it. The "me" centric folks have decided that regardless the vows and commitments made at marriage it is perfectly acceptable to bail on the marriage when things don't go your own way.


Then there is the gay marriage discussion. Some say once that door is open then people will be marrying animals or something else.  I have never heard an argument as patently ludicrous. The same people that rail against government intrusion in their life wish to  prevent loving same-sex couples from sharing in the legal benefits of marriage based upon the so-called rules of life dictated from some old bearded gentleman in flowing robes that lives in the sky or his Jewish rabbi son.

I was married for 42 years - from 01/01/1972 until 02/10/2014.  The "til death do us part" clause kicked in then when Lynn died. We were together as a couple from 12/31/1998 until that day in February.  Over the years we had issues like any couple  - but we worked through them.  Some issues were not easy but we did not bail.  As a result it is a major point of pride for our kids that they had the same parents - no steps - throughout their lives. We simply believed in ourselves as a couple enough to stick to it.  And trust me - the last 10 years offered more than enough reasons for me to bail.  During that time I was regularly cursed, physically attacked and more.  But that was the disease speaking and acting - not Lynn.  There were also moments when she  would walk up to me, hug me and say she loved me.   Or a few nights when there were quiet, reflective, happy conversations - always short but exceedingly happy moments.  Those were Lynn fighting through the disease that eventually claimed her. Marriage and the commitments we made were the glue that kept us together. I like to think I would have done the same had we simply lived together all of those years but that's something we'll never know.

Unfortunately too many people these days do not have the same attitude.  Again - the me-centric folks do not place the same emphasis on staying married.  Why bother  - they say. I can't answer that one for them - but marriage worked for us. It's one of our cultural norms that resonated.  It still does.


So to sum up - I'll go on record as being a supporter of matrimony.  I also am a supporter of gay marriage.  People in a loving relationship all deserve the same legal benefits.  Religious objectors are entitled to their opinions as well - I choose to disagree wholeheartedly with them and I resent the hell out of their attempts to modify our constitution to  their benefit. Nor do I take issue with folks who divorce . It's their business - not mine. I just hope they made every effort to fix things first.    I'd say this simple song from the sixties - written by my good friend Ron Ryan - sums up my notion pf marriage


That's a shack take on matrimony.  Check out what Maxi, Ramana and the others have to say.
Posted by Shackman at 6:46 AM 7 comments:

Indifference.  It's truly one ofthe greatest evils facing us these days.

Indifference.Take politics for example.  Overall, OECD countries experience turnout rates of about 70%, while in the U.S., about 60% of the voting eligible population votes during presidential election years, and about 40% votes during midterm elections. Indifference is the reason.   I find it odd that our rapidly declining middle class is syill willing to allow the future of this land be determined by so few. Where has indifference led us?  This cannot be embedded but take a look

A good place to start may well be found in this old tune:

If there is a circumstance where indifference  is the order of the day I suggest it is death.  One's own death.  Death is a certainty.  It's gonna happen sooner or later. Stop worrying about it - get over it. Spend your time living life as fully as you can.  Sure - as we get older  we cannot do as much as we used to.   Put me at the top of a steep hill and roll me down it and I still wouldn't do a mile in under 6 minutes like I did the last year I played football. 300-ft. home runs long ago left the building. But I do read more.  I do think more.  I tend to care more about substantive things.  I have not become indifferent to life.

That to me is the greatest evil of all.  If you are indifferent to life then quite frankly tou are breathing good air a useful human being could use. Get off your butt and do something.

Fans of William Shakespeare will recognize this week's topic as the title of one iof the bard's plays. Let me state unequivocally that I am NOT a fan of the man nor of his work. What can I say.  It must be the lineman in me. I suppose my distaste for Will dates back to the time I was forced to sit through one of his plays at the Old Globe Theater in San Diego.  I was 11 or 12 at the time and on a week long holiday visiting my namesake Uncle Chuck and his family.  Good old Anut Sue decided to add a bit of culture to my life beyond science fiction literature which I devoured at the rate of a book a week back then. Alas - much to her chagrin, she failed.  Chuck thought it was funny - I suspect he disliked the play as much as I did but knew enough to remain silent about it.

The phrase, though, implies there are many ways to enjoy or appreciate whatever the topic at hand.  For example I prefer my beef bloody rare. I find beef cooked anything beyond medium rare virtually tasteless.  Again - must be the lineman in me.   For my non-American readers here's a representative image of linemen:  Fans of American football might recognize 3 of the Fearsome Foursome - one of the most legendary defensive fronts ever. 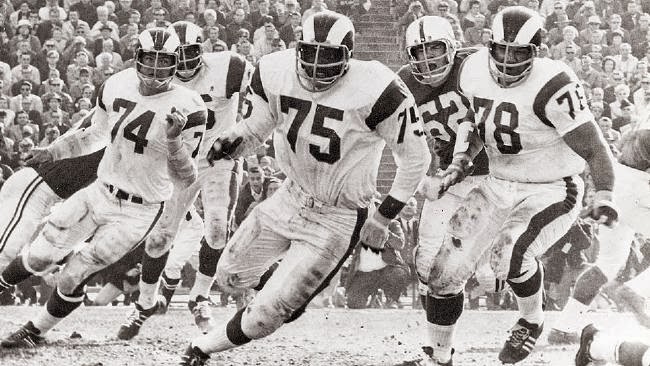 Now don't assume I dislike plays - in fact I really enjoy them.  When I was in gradeschool in Pueblo Colorado I used to look forward with delight the daysd the local JC drama department put on plays for kids and upon leaving Carlisle School after a day of learning several of my friends and I would hustle down to the JC and watch that afternoon's offering.  My first exposure to Grimm's Fairy Tales came from those plays. And I am a huge fan of musicals - my favorite being Camelot.  I have seen Camelot on stage with both Richard Burton and my personal fave - Richard Harris - as Arthur.

I saw Mr Roberts at a theater in the round and the actors were upstaged by a goat that relieved itself at center stage - causing even the actors to laugh.

So there you have it.  Different strokes for different folks is the order of the day.  Better see what Ramana and Ashok have to say on the matter -  hopefully they didn't struggle with the topic as I did.
Posted by Shackman at 6:43 AM 3 comments: